The Most Wanted Painting in the World po

If our culture is the shared memory of all historical experiences or, as renowned journalist Ryszard Kapuścinski claims, “we are human because we recount stories and myths”, then the huge painting (twice the size of Rembrandt’s Night Watch) covering a whole wall of the National Museum in Warsaw provides a major opening into the history of Central Europe.

Created to provide inspiration and resistance during the period of Empires and partitions, Jan Matejko’s “The Battle of Grunwald” became the focus of search, torture, bribery  and a huge  “wanted” reward following the Nazi invasion of Poland in 1939.

The painting, depicting the famous struggle in 1410, essentially highlights the death in battle of Teutonic Grand Master Ulrich von Jungingen against King Jagello’s Polish-Lithuanian forces and the charge by the hero Vytutas. This portrayal was seen by the Nazis as an unwelcome reminder of the greatest confrontation in medieval times and earmarked Matejko’s masterpiece for destruction.

The Teutonic Knights, a heavily armed German military order, were originally invited from Jerusalem by a Polish prince in 1230 to help spread Christianity. Instead, the Knights established an expanding monastic state along the Baltic coast based around their impregnable castle at Malbork/Marienburg. They extracted feudal levies, seized control of the lucrative amber trade and made themselves a naval power as well.
Over time their rule was transformed into, first the Duchy, and then later, the Kingdom of Prussia, but not before the Knights suffered a major defeat at Grunwald in 1410, thus halting major Germanic expansion.

It also obliged the Grand Masters/Dukes to pay homage to Polish kings (the subject of another major Matejko work). Although the Knights may have been defeated, their state eventually became the expanding Prussia of Prince Bismarck and his Germanization policies or “KulturKampf”, when all non-German schools and universities were closed down and printing in other languages forbidden.

The Nazis, in turn, saw themselves as a kind of continuation of the knights mission, on their way towards a world empire. When attacking Russia Hitler affirmed “We will give this country a past. We will take away its character of an Asian steppe. We will Europanize it”.

Hitler stated clearly that he wanted to erase the identity of neighbouring nations. Himmler, leader of the Gestapo security forces, had emphasized that “Polish lands are to be converted into an intellectual desert”, while Propaganda minister Joseph Goebels was anxious to establish German superiority by proving that all other cultures had German origins. With this in mind, a spectacular portrayal of past defeat could not be tolerated, so experts were specifically sent from the Reich to destroy all monuments  of national identity.

Among the first to be blown up was the granite and bronze “Grunwald” monument in Cracow, a pre-WWI symbol erected for the 500th anniversary of the battle, due to efforts by world famous musician Ignacy Paderewski. This was followed by destruction of the statues to poet Adam Mickiewicz, revolutionary independence hero Kościuszko and even the prominent monument to Frederyk Chopin in Warsaw’s Łazienki Park was cut up and sent for smelting. A new museum claiming Chopin’s (non existent) German roots was established by 1943. The search for these symbolic art works was relentless.

By 1942 Nazi administrators estimated that 90% of art in Poland was in their possession, including hidden masterpieces such as Leonardo da Vinci’s 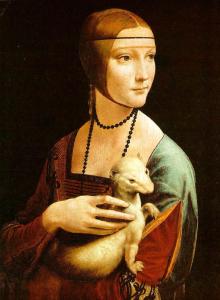 “Lady with an Ermine”, which was betrayed to the Gestapo within days of the Occupation. Seized by governor Hans Frank, it was hung in his family living quarters and is still remembered as a picturesque backdrop by his son Niklas. Even the largest Gothic altarpiece by Veit Stoss was dismantled and transported to Bavaria on Frank’s orders. Looted and confiscated art was to form the core of the proposed Führermuseum in Linz or the Herman Göring collection. Today, it is estimated that at least 100,000 items have still not been returned to their rightful owners.

During this time, Himmler and his SS infiltrated the army and, similarly to the Knights, created a state within a state. He actively encouraged the SS to seek out the Church of the Teutonic Order in Vienna as a symbolic source for his military elite (the actual religious order had been abolished by 1938). The highest award of the Third Reich became a badge/insignia modeled on a crest of the historic Order and given first to SS General Reinhard Heydrich and then the top ten Nazis. They created a bureaucracy of terror at the centre of which was a network of concentration camps.

Somehow the huge Matejko canvas survived the first World War period. It had been taken to Czarist Russia and returned by the post-revolution Soviet State only in 1922. The theme of the struggle against the Teutonic invaders was also taken up by Nobel prize writer Henryk Sienkiewicz in the same spirit of “Romantic Nationalism” as Matejko’s. The conflict was portrayed in his 1910 novel “The Knights of the Cross”, later turned into a a 1960 film by director Aleksander Ford.

In Soviet Russia, cinema great Sergei Eisenstein directed his 1938 classic “Alexander Nevsky” (complete with a music score by Prokofiev). It portrayed an attack over frozen Lake Peipus against the Russians, by the Livonian branch of the Knights. The film ending, with the heavily armoured Teutonic horsemen drowning as the ice collapsed under their weight, was presented as symbolic retribution for spreading Christianity by the sword.

During the Nazi occupation of Poland, what made the survival of “Grunwald” more remarkable was the intensity of the search for the removed painting and the astronomical reward offered. Initially, on Goebels orders, the museum curator was to be bribed with two million Reichmarks (about $16M USD in today’s money)  to reveal where the picture was hidden. When this was refused a public broadcast increased the sum to ten million Reichmarks (approximately $80M USD in today’s money).
Captured underground resistance fighters were tortured to death by the Gestapo seeking its hiding place. All to no avail. In fact, the  canvas had been rolled, placed in a specially made wooden box and secretly buried in a protective stone sarcophagus close to a village near Lublin.

The search by the Nazis was only abandoned when, in a clever ruse, the Polish government-in-exile based in London, announced the arrival of the painting in Britain. It actually only emerged from hiding in Poland after the war to be exhibited by 1949.
After years of meticulous restoration, finally finished in 2012, “The Battle of Grunwald” has once more taken pride of place in Warsaw’s National Museum, where it provides a visual insight to the struggles in “God’s Playground” (Norman Davies), still studied by modern historians and visitors.

In the rebuilt Old Town of Warsaw, on the façade of the cathedral, restored after Nazi destruction, the importance of national memory is emphasized with a plaque quoting Cardinal Wyszyński :

Jan Matejko’s Battle of Grunwald is a vital, imaginative link to that past.