On the Golden Eagle across Siberia (Part VI) – The Siberian Capital

On board the Golden Eagle, our ubiquitous Train Manager, Tatiana, conducted almost daily Russian classes.They were both useful and highly entertaining. By the time of the Farewell Evening we were able to join in a vigorous rendering of “Kalinka maya” during our music-bar/lounge evening.

Dan, our Oxford Professor, was also tireless, presenting, explaining, enlightening. His series of lectures, complete with a freshly assembled final reading list, included numerous topics. Among those covered were the conquest of Siberia and the valuable fur trade which drove the Russians towards the Pacific. Other topics were Red Siberia that depended totally on the train as Lenin understood that “if the trains stop that will be the end for the Reds” and pre WWII Siberia, initially beaten by backwardness, yet only 10 years later ready to face Nazi Germany, in part due to the world ‘s largest steel plant at Magnetigorsk. Post-war, the enormous oil and gas discoveries are seen as a source of developing wealth. In turn, the exciting story of the backbone of Russia, the Trans-Siberian Railway, its evolution and importance for freight transportation, gave us understanding to what we could observe daily on the tracks, the roads even today not good enough for regular year-round travel.

A final lecture on Siberian exile up to Solzhenitsyn and the Soviet Gulag prison system, explained the tragedy of a region which swallowed 20 million people, even if, in the past for the peasants, Siberia stood for freedom from serfdom. Prisoners still exist and more recent high profile deportees included Mikhail Khodorovsky although his forced exile, currently in Switzerland has rendered him less relevant to Russians today.

Soon enough we reach Novosibirsk created around the Trans-Siberian Railway bridge over the river Ob. The city developed so fast that for a time it was spoken of as the Chicago of Siberia. Now with 1.5 million people, and the Siberian capital, it has one of the youngest populations in the world. These Siberians see themselves as the “purer essence of Russia” and remain warm and hospitable, quite open to outside influences, visitors and fashions (including some of the highest heels on ladies shoes that I have seen anywhere). This is now a wealthy region since the post-soviet privatisation of Sibneft and the largest oil refinery complex in Russia, run by Gazprom Neft. Oil and gas produce 70% of Siberia’s budget, replacing the former local military industries.

Inevitably the focus of this city is Lenin Square. A solid statue represents Lenin as the Revolutionary Leader facing towards a distant horizon. He was characterised by Pasternak as one so focused as to be “narrow minded to the point of genius”. In the various provincial stations such as Belogorsk where we stop along our journey, Lenin is usually portrayed in full speech, arm upraised in emphasis as at the famous Finland Station arrival, to inspire the Bolshevik revolt. However at the mausoleum in Red Square, Moscow, the embalmed figure is closer to Pasternak’s observation that “…for decades after…the spirit of narrowness is worshipped as holy”.

On the square, we visit the Opera House. Larger than the Bolshoi in Moscow, it has a huge stage of 1,300 sq.mts. Sometimes referred to as the “Siberian Colosseum”, it was prepared to accommodate the rousing parades of the Stalin period when at times outside temperatures dropped below minus 40 centigrade. The company also produces a steady stream of excellent ballet dancers. Ballet school studies are free of charge. 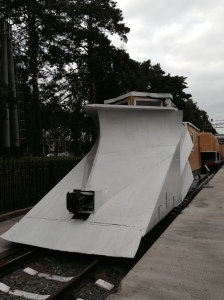 Our final visit of the day is to the open air Railway Museum outside the city. The exhibits range from ultra streamlined snow ploughs to the barred compartments and cells of the former prisoner transport carriages. Returning to the city and the Golden Eagle, we pass the Akademgorodok, a former concentration of Soviet scientific brain power. Now financed privately by venture capital from Intel and Schlumberger it is nick-named the “Silicon Forest”.

Back on the train our maps show that Semipalatinsk is only a few hours south of Novosibirsk. There, the Soviet Atom Bomb program was developed involving over 450 nuclear tests and accompanying radioactive fallout. It was also the town where, after Omsk, Dostoyevsky was forced to complete his last years of exile, this time as a soldier. His years of hardship and reflection were followed by the great novels, most notably The Brothers Karamazov a book which contains the complex parable of Christ returning to earth but being confronted by The Great Inquisitor, seen as yet another window onto the Russian soul. The parable was a challenge for actors to present on stage but was rendered brilliantly by Sir John Gielgud (and worth looking at on You Tube) making Dostoyevsky relevant for all times.

On the Golden Eagle across Siberia (Part II) – From Moscow out! 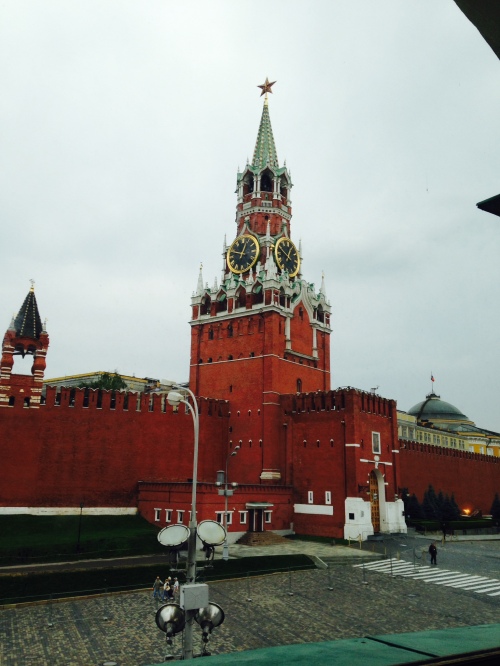 We began with an assembly at the Royal Aurora Hotel in Moscow. The travelers had gathered from various parts of the world. Some had taken a comfortable river cruise from St.Petersburg, most had been met after arrival at Domododevo Airport. En route to the city we were greeted by numerous hoardings featuring a large Gerard Depardieu, a new Russian passport holder (and 13% taxpayer), advertising something forgettable. Others announced the release of some torrid film called “Sin City 2”. There are many new Orthodox churches with beautifully gilded domes, countered by 7 storey Munich-style glass walled motor car showrooms. Traffic lights on major roads have a 60 second numbered countdown for drivers. We pass branches of  “Makdonalds” (several recently closed down in retaliation for sanctions, though officially on “health and hygiene” grounds). The Dostoyevsky monument stands out  in front of the Russian State Library. Nearby, a flower-selling cabin is offering a 24 hour service.

Unlike the old Soviet days, when even luxury hotels, like the huge Rossyia, were controlled by the floor ladies and it was advisable to bring your own toilet paper and rubber washbasin stoppers, our hotel was fully equipped (while the old Rossyia has been demolished  to be replaced by some complex inevitably designed by the ubiquitous Norman Foster). Like all Marriott managed hotels, the Aurora included a drawer containing a Bible, a Book of Mormon and a company mission book, in which Bill Marriott assures us that “if you treat your employees well, they’ll take care of the customer”. There were magazines offering very complicated watches, and cocktails, also a large catalogue of jewelry by ultra refined Boucheron from Paris (who have a branch in the hotel building). The nearby GUM department store even contains an unofficial but very Apple Store-like retailer.

The Golden Eagle Trans-Siberian Express has prepared drinks, dinner and briefing in the elegant Petrovsky Room. Our fellow participants have come from Montparnasse and Monceau, Ballerat and Peppermint Grove, Hawick and Clapham, Totness and Cardiff. Some others from Anchorage and Manhattan, New Forest, Toronto and even Taiwan. All inspired by the romance of this journey, a rich mix of stories and experience.

We are introduced to our traveling on-board physician, Dr Judy, from the Cotswolds, and even our own Oxford Don, Professor Healey from St.Antony’s (so all aspects seem covered, taking note of Paul Theroux’s warning that travelers may not know where they are going, but tourists don’t know where they have been).

Next morning Golden Eagle have arranged a privileged early entry to the Kremlin Armoury buildings. We walk past President Putin’s office on our way to the building that contains the most important exhibits, including the

renowned Fabergé display. This includes a tiny Trans-Siberian train of five carriages, which used to be rolled up inside an egg. It can stand freely, while the little mechanical engine can pull the carriages two whole inches.

On the way to the Kazansky station, we pass near Lubianka square. The ex-KGB building is being renovated. The organisation is now known as the Federal Security Bureau. There is talk of the Feliks Dzerzhinsky statue, removed in 1991, being returned. This founder of the Cheka, set up to counter so-called internal threats, ordered the execution of thousands of political opponents without trial. Now his bust is already back at the Moscow police headquarters. In a 2013 poll, some 45% of Russians would approve the return of the 15 ton monument. At present the memorial to the Victims of the Gulag stands near the empty original plinth. Dzerzhinsky himself was twice sent to Siberia during Czarist days, a reminder of a more recent deportee, the oligarch who developed the Siberian oilfields, Mikhail Khodorovsky, whose ordeal evolved from an economic and political opposition to a simple defense of his human rights. Sent to Siberia near Chita (where our train is scheduled to stop briefly  on the way to Khabrovsk and Vladivostok) in 2005, Khodorovsky was finally pardoned by President Putin and released last December. He is now based in Switzerland.
On the train, regular briefings/talks/debates are scheduled, as well as the 2-part BBC documentary  “Putin, Russia and the West” also providing a background to the Khodorovsky confrontation. Other topics will include a discussion on Stalin and a film on Genghis Khan. We will be fully invo

lved with the different regions every day and will hardly have time to access the comprehensive  and relevant DVD library on board.

For now, champagne awaits us in the Imperial Waiting Room of the station, our enthusiastic young train attendants are introduced, a band plays and we board the elegant blue coaches of the Trans-Siberian Express. There are fifteen carriages: accommodation for our 50 passengers, two restaurant cars, a bar lounge with live music, a kitchen car, a staff car and a generator. Each guest compartment includes private toilet and shower facilities. Secure safe-deposit boxes are a standard feature. The attendants take turns to be on duty 24 hours. Ready to begin our classic journey of over 10,600 kms, the train moves out, towards Tatarstan and its capital Kazan tomorrow.