The Russians have landed at the Golden Gate! 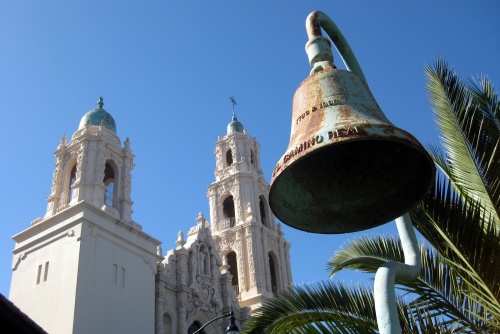 A messenger came running through the corridors of the Viceroy’s residence in Mexico City. He urgently demanded to see the Spanish King’s Visitador General  – “Your  Highness, the Russians have landed at the Golden Gate!”.  These words set in motion a whole chain of actions which resulted in the naming and the myths of California.
Cabrillo, in 1542, had been the first to sail along the California coast, claiming it for Spain – but by the mid-1700’s all of Europe seemed to be attacking  the once mighty empire of Spain’s King Charles V, on which the ” sun never set ” . There was a loss of energy and spirit everywhere except in New Spain where missionary efforts were pushing the great frontier.
Politics were ever present. The Jesuits had been a kind of advance-guard  with their trademark  Black Robes , arriving ahead of the soldiers,  but back-stabbing at the courts in Madrid and Mexico City saw their universal expulsion by 1767. The Franciscans, less intellectual but more practical, took over, struggled with the politicians, and in fact had more problems with Yankee traders than the Russians.
The great force of the Franciscans was a short, ascetic friar from the island of Mallorca, Junipero Serra. He had planned to establish a chain of missions, each a day’s ride apart, that would extend “El Camino Real” (The Royal Road) to the north from its then limits in Mexico and Baja California. The road itself was a mule track along the mountains, through sand and forest elsewhere, a pathfinding slow road “to eternity”, quite unlike the great roads in Europe built for military reasons by Napoleon.
By 1772 Father Serra had four small churches built between San Diego and Monterey and, in 1772, a first watch tower was built at the Golden Gate. Among the outposts established by the Franciscan friars led by Junipero were Los Angeles (1767), San Francisco (1776), Santa Clara (1777) and Santa Cruz (1791). As a result of this work, Junipero Serra had gained the unofficial title of Founder of Spanish California.
However, it is to the heart of Europe, to Italy, that we have to go to find meaning in those California place-names. Assisi, pink stone glowing from a distance, is a skyline of prominent towers, castles, domes, walls and churches. One of the great destinations in Umbria’s  “land of the saints”, it celebrates the Christian teachers of internal life – St. Benedict and St. Francis and, of course, their enthusiastic followers.

Outside the medieval walls, the enormous dome of the Basilica Santa Maria degli Angeli stands over the exquisite ninth century chapel, the Porziuncola.This chapel, said to have been once given to St. Benedict, was offered  to St. Francis in 1208  as a founding  home for the Franciscan order.It celebrates the Virgin Mary’s Ascent into Heaven.
Climbing the roads inside the town, narrow streets lead to the great Gothic Basilica of San Francesco d’Assisi, it’s upper and lower churches covered with frescoes by fabled artists, including Cimabue and Giotto. This makes it one of the artistic highlights of Europe, noted for its unique tranquility despite being a major stop for visitors, and of course countless pilgrims.

These great Christian monuments follow the footsteps of  Francis of Assisi, a man who was transformed from playboy, soldier and singing troubadour into one of the great human spirits.  At the end of the Dark Ages, he focused attention on the humanity of Christ and  the celebration of God through his creation, philosophically returning man’s attention back to earth. It was important that the Franciscans were to be friars, free to move and travel, not monks tied to a monastery. The rope around their waist with three knots is there to remind them of their vows of poverty, chastity, and obedience. Francis himself travelled to Spain, Morocco and with the Crusaders to Egypt and the Holy Land.
It was the Spanish followers of St. Francis who created the mission on the edge of the western world. So it is interesting to note how the positioning of churches in Assisi seem to be reflected in the cities that have grown up in California.
Just like Santa Maria degli Angeli is at the base of Assisi situated outside the walls, so the mission named after it by those Spanish-speaking Franciscans, Nuestra Senora la Reina de Los Angeles de Porziuncola (Our Lady Queen of the Angels of  Porziuncola), has grown to become today’s prosaic “L.A.”, situated in the southern part of the state.
In turn the naming of San Francisco (1776, after the Basilica of San Francis), and Santa Clara (1777, after the Basilica of Santa Chiara), both in close proximity, in the northern part of the state, reflect the position of the great churches on the slopes below Mount Subasio in Assisi. While the Misión la Exaltación de la Santa Cruz (named for the feast of the Exultation of the Holy Cross) is also an echo of the great Franciscan burial church, Santa Croce in Florence. It is these fascinating links between the energetic modern cities of California, north and south, and the original Spanish Franciscan pioneers that gives an additional resonance and stimulus to the imagination.

The connections with the spiritual heart of Italy are reinforced by the recently elected Pope, the Jesuit Cardinal Bergoglio – who adopted Francis as his papal name. True to his namesake, he has embraced humility, but seems to have a twinkle in his eye. Coming from Argentina, a wonderful wine-making country, he would undoubtedly appreciate the fact that Saint Francis warned the friars not to be sad and gloomy, and the pope would surely chortle at the typical clay-souvenir mementos frequently seen in Assisi today.Amusingly one of the most common is a representation of two friars standing by a big barrel with a sign that advises to “drink the wine on earth as there is none in heaven”.